How to handle stepping into the unknown 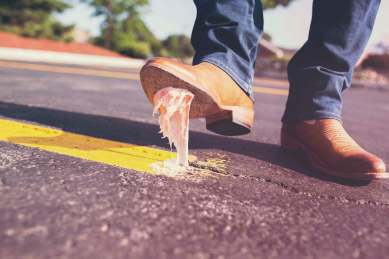 Until very recently, I had a day job. It was writing, but it wasn’t really. It paid the bills but it left my creativity account empty — a little overdrawn even.

The job took more than it gave. It gave me numbers on a screen. It gave my family some financial security. But along with my creativity, it took away my confidence, my time, my head space, and my sense of self-worth.

And I let it. For five years.

So why do I feel so numb?

I expected to feel immediately elated by the change. To feel different from day one. But although I’m glad I’m not at the day job, I just feel overwhelmed, a bit blue and (inconveniently) a little bit stuck.

A change is as good as a rest, they say. But that’s bollocks — real change is scary, confronting and bloody hard work. Because it’s stepping into the unknown.

Here’s how I’m coping with the challenge of change.

Focus on the positive
In the first week of freelancing I had some less-than-average feedback on my work. It had never really happened before and it was a shock. It made me question my drastic career change. I also received three beautiful ‘no changes required, love your work and thanks’ emails. But I focused on the shit feedback and let that define my beginning. Flip it. Embrace the good stuff. Be grateful for each small success. If you’re struggling, write the positives down. By acknowledging only the positive, it becomes the star of your show. The negative fades into the background.

Change takes time
We’re bombarded with media that tells us we can get the perfect job/man/figure in JUST ONE WEEK! You know that’s unrealistic, but someone’s doing it. Right? Wrong. It’s spin. No one is doing it. No one. When you measure your progress during change against a benchmark that’s pure fantasy, you’re setting yourself up to fail. Real, lasting change takes time. Take it step by step and day by day. Give yourself time to adapt. Breathe. Nurture your change and let it grow.

Stop expecting perfection
For 5 years I built up a fantasy of what it would be like when I finally made the change and left my job. It would be perfect. I would wake at 6am to do yoga, meditate, have a nourishing breakfast, be present with my kids, then glide serenely into 8 hours of creatively fulfilling, well-paid and well-received work, taking breaks to sip green tea and snack on super foods. The reality? A little different. My  expectation of perfection wasn’t realised, so I felt disappointed, resentful, angry, unsatisfied and unseen. In the choppy waters of change, unrealistic expectations weigh you down. Release them.

Pin it to win it
This may come as a shock to you but I was once unemployed for a couple of quite depressing months. I put up a proper old-school cork board. I cut out photos from magazines and pinned them up on my vision board for inspiration. It sounds wanky, but it helped. When you’re struggling with the day-to-day of change, it can be fun to visualise your future success.

Keep going
If you want to make change work badly enough, you will — despite the inevitable stumbles and slip ups. Guilt about failure can be debilitating. Be your own best friend. Be kind to yourself, encourage yourself, celebrate your progress, however small. If you persist, you will succeed.

Change is challenging and scary. But what I’m trying to remember is that not changing is even scarier. Embrace the uncertainty. Life isn’t meant to stay the same. There will be highs and lows. Your job is not to control the ebb and flow — it’s to learn to ride the waves.

Like this post? Come and ride the waves with Wellbeing bites. Sign up to receive Wellbeing bites posts by email and change your inbox for the better.